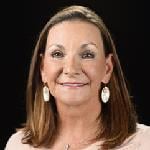 While at the helm of Bama, Marshall has grown the organization to a $300 Million company all while putting a precedent on quality. Bama won the prestigious Malcolm Baldridge Award for Quality in 2004 from the United States Department of Commerce, and has been hailed as a leader in the baking industry.

Marshall has served as Chairman of the Tulsa Chamber of Commerce, and was one of the first women asked to join the Young Presidents Organization Oklahoma Chapter in 1990. In 1993, she was named one of the Top Ten CEO’s by IndustryWeek magazine. She was selected Entrepreneur of the Year by Ernst & Young in 1997. In 1998, she was named to the Oklahoma Department of Commerce Business Hall of Fame. Recently she was nominated as one of Oklahoma’s Most Admired CEOs by The Journal Record.

Paula is the author of Finding the Soul of Big Business and Sweet as Pie, Tough as Nails. Her newest release, The Executive Entrepreneur was co-authored with New York Time Bestselling author Jim Stovall. Her books are available on Amazon.com.