Most of Dr. Deming’s management work requires no understanding of advanced statistical methods. He was also a statistician and this post takes a look at one of his contributions to the field of statistics: the Deming Regression. 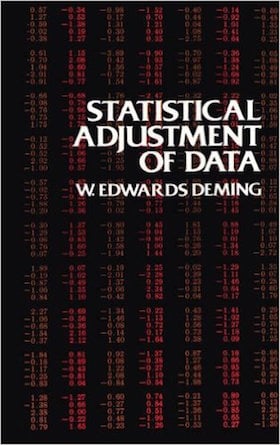 The method became known as Deming Regression and is similar to the idea of finding a best fit line through data using the least squares method of simple linear regression. The Deming Regression is commonly used in clinical chemistry. The general concept was originally proposed by R. J. Adcock (in 1878) and refined by C. H. Kummell in 1879. It was largely overlooked until T. C. Koopmans (a Nobel Prize winning economist) published on the topic in 1937 and then W. Edwards Deming’s 1943 book.

This post isn’t going to be of interest to a fair number of readers (at least in as far as understanding the statistics goes) but I think it is an interesting view into the breadth of Deming’s work. It also shows once again both how Dr. Deming was able to use and popularize good work by those who came before him and how long good ideas can sit unused. That second point is one I feel is overlooked by many who seek the new new thing instead of just looking at all the very good old ideas that are not being used.

You may read more about the Deming Regression on the NCSS statistical software web site. Here is a plot from their article: 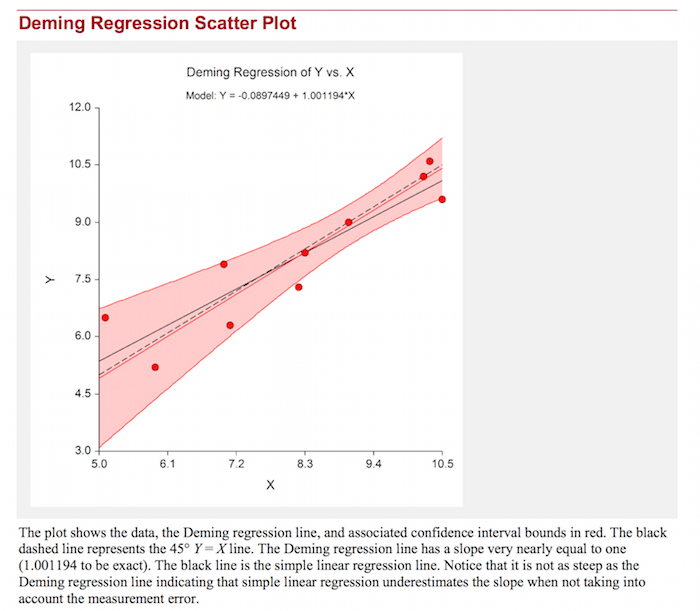 A few statisticians reading this blog may understand these formulas but mainly I include it just because I think it is interesting that some people think in ways that comprehending such “scribbles” 🙂 come naturally to them. My father was a statistician so I probably have found memories of seeing similar things on the chalkboard in his office. Anyway I just think it is fun. Related: Some Statistical Logic in the Management of Quality by W. Edward Deming – Podcast with Lynda Finn: The Value of the Simple Run Chart – Enumerative and Analytic Studies – Statistical Techniques Allow Management to do a Better Job