Posted In: podcast, respect for people 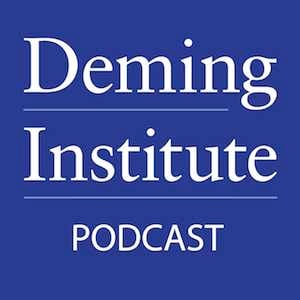 Gordon McGilton, director of a private equity fund with investment in multiple industries, discusses applying Deming’s management ideas at the companies they invest in. (download the podcast). Gordon will be presenting the 4 Day Deming seminar with Heero Hacquebord 27 to 30 April in Columbus, Ohio.

Gordon McGilton went to a 4 day seminar but didn’t find anything worthwhile. He told his company that opinion and they told him they were committed to Deming’s ideas and sent him back to learn again. This type Gordon understood the exception so said he found it educational even though he didn’t find it worth paying attention to while he sat there.

However, when they sought to understand the insights Gordon had made he was unable to provide adequate replies. So they sent him back again. This time Gordon understood he needed to have answers to their questions so he listened to get those answers but was still convinced the actual content was useless. So he talked to his colleagues at work (by phone during the evenings while he was at the seminar) he asked what they told the company (since they all had attended once and then stayed at work).

However, even that didn’t work, as when he was asked to elaborate on the answers he had prepared he wasn’t able to. At this point Gordon even told them if they were just looking to get rid of him, they could just do it, they didn’t need to keep this up. But they didn’t want to get rid of him, they just wanted him to understand the management philosophy the company would be using.

So he went back for his 4th seminar. And at that 4th seminar it fell into place for him. It made sense to him. He understood how different it was from what he had believed. He acknowledged he wasn’t an expert but he understood the profound differences from his old way of thinking and this new view.

Gordon shares some of what he learned in his transformation and his 30 year journey applying Deming’s management ideas:

First and foremost is the fact that you can’t increase someone’s capability by offering them money or by threatening them. That, for me, was an enormous breakthrough because I had been raised on an intimidation model. You either bribe or threaten people, and thats how you got things done…

Once I saw that providing instructions to people and providing them the tools, the information and support they needed was what really produces performance – that was a breakthrough.

The switch to theory y (people want to do good work) from theory x (people work for bribes or in fear of threats) thinking makes a huge difference. And along with that comes the understanding of the organization as a system. Blaming and threatening people isn’t an effective strategy. Find how the processes need to be improved to improve results and work on that.

And Gordon mentions the 2nd seminal idea was understanding Deming’s view of the organization as a system.

The first thing they do when starting a transformation to the Deming management system is to make the system visible. They focus on getting people to view the organization as a system and see that system (instead of seeing people to blame for example, in the old model). This is an effort that involves everyone in the organization.

The thing Gordon sees people struggle with most in adopting new management methods is letting go of their old ways of thinking. Over and over he sees people try to take ideas and fit them into the old way of thinking – they want to keep that model and just adjust a small bit here and there.

The problem with that method is the Deming management system isn’t a few tools you can take and apply within the old way of thinking. It requires a coherent system of management. And that almost always requires changing core principles not just making minor tweaks around the edge.

I haven’t found it [the Deming Management System] difficult at all once you see it.

The old phrase “I’ll believe it when I see it” is incorrect. “You’ll see it when you believe it.” Once you see it, there is nothing difficult about it. Its actually so much easier than the traditional management system.

Related: Transforming the Organization, Deming Podcast with David Langford – On the Use of Theory – The Tyranny of the Prevailing Style of Management – Manage Better by Managing Less