Reactions to “If Japan Can, Why Can’t We”

We recently announced the availability of the 1980 NBC News special report, “If Japan Can, Why Can’t We,” that introduced Dr. Deming to the USA business community. Many people have enjoyed viewing that program. Here we collect some of the reactions that have been posted online.

If Japan Can, Why Can’t We? A Retrospective by Nicole Radziwill

June 24, 1980 is kind of like July 4, 1776 for quality management… that’s the pivotal day that NBC News aired its one hour and 16 minute documentary called “If Japan Can, Why Can’t We?” introducing W. Edwards Deming and his methods to the American public.
…
Many managers at that time were convinced that if a productivity problem existed, it was because the workers didn’t work fast enough, or good enough — or maybe they had attitude problems! Certainly not because the managers were not managing well. Implementing simple techniques like improving training programs and establishing quality circles (which demonstrated values like increased transparency, considering all ideas, putting executives on the factory floor so they could learn and appreciate the work being done, increasing worker participation and engagement, encouraging work/life balance, and treating workers with respect and integrity) were already demonstrating benefits in some U.S. companies. But surprisingly, these simple techniques were not widespread, and not common sense. 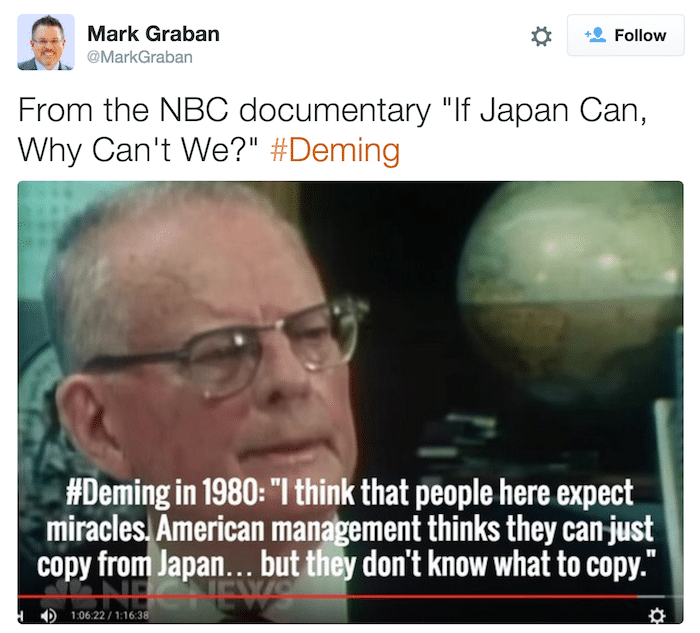 Famed NBC Video with Dr. Deming from 1980 Now Available: “If Japan Can, Why Can’t We?” by Mark Graban

I’d encourage you to watch it, not just out of historical curiosity, but to think about how this video and story is relevant today, 35 years later.

“I want to be somebody.” by Dan Markovitz

But for me, the most poignant and powerful moment in the video came in the segment on GM’s “Quality of Work Life” program. One of the Tarrytown workers said (starting at 59:25),

“Quality of Work Life is involvement. Involving me in the decision-making process. And treating me as… as somebody. I want to be somebody.”
…
When I think about lean, and about the profound respect for people that lies at its core, this is what I’ll think about. At its best, this is what lean does. It makes people feel like a somebody.