A Bad System Will Beat a Good Person Every Time

By John Hunter, founder of CuriousCat.com. 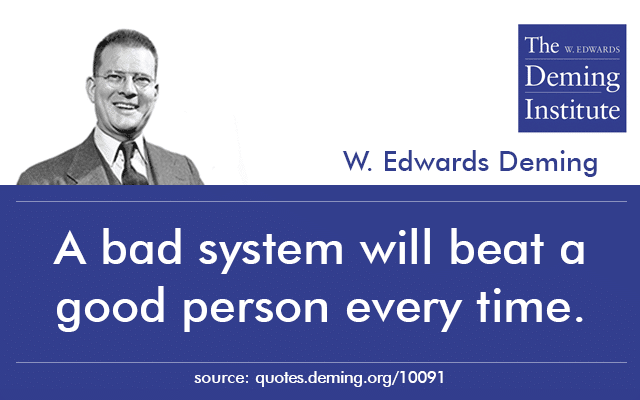 Quote by W. Edwards Deming at a February 1993 Deming Four Day seminar in Phoenix, Arizona (via the notes of Mike Stoecklein).

As Deming said we are being destroyed by best efforts. Trying harder, to do what you understand as your job, when the system is broken often results in more damage. Don’t just do something, stand there (and think).

So if a bad system will be beat a good person every time what can you do? You have to focus not on trying harder within the current system but on changing the system so that success is built into the system. Relying on heroic measures is a poor way to manage.

Related: The System Will Produce What It’s Capable of Producing – 94% Belongs to the System – We are being ruined by people putting forth their best efforts – Effort Without the Right Knowledge and Strategy is Often Wasted

Dr. Deming provided some great quotes that Twitter (follow us on Twitter @DemingInstitute) and such services have given increased attention to. Some are fairly easy to source in his books or articles. Many more come from his videos and seminars and consulting engagements.

We have a collection of sourced quotes by W. Edwards Deming and also those quotes that haven’t been sourced yet, but are likely something he said.