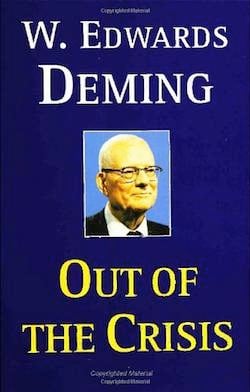 Out of the Crisis included a couple pages (245-7) that Dr. Deming asked my father to write on the efforts to apply Deming’s management ideas at the City of Madison (the first effort to do so in the public sector as far as I know). This article provides more details on that effort and is packed with good ideas: Quality Comes to City Hall, Harvard Business Review, 1991 by the former mayor of Madison, Wisconsin – Joseph Sensenbrenner.

Deming said, it was our system of make-and-inspect, which if applied to making toast would be expressed: “You burn, I’ll scrape.” It is folly to correct defects “downstream”; the critical issue, he said, is to get your “upstream” processes under control so you can guarantee the outcome every time. To do this, an organization must create a culture of quality; it must master proven quality techniques. Most important, it must define quality—first, as continuous improvement in pleasing customers and second, as reducing the variation in whatever service or product it offers.

Changing to a culture that has a Deming perspective on customer focus is not easy. When you succeed though the way people think is profoundly changed. The City of Madison police department even did customer surveys for those they arrested and used the results to improve the process in ways that make sense. Obviously there are restrictions on what you can do to please those being arrested but this is really always the case – you can’t give all your products and services away for free even if that would make customers happy.

The first initial effort with the City maintenance garage ran into issues created by the existing management system.

We discovered that the fleet included 440 different types, makes, models, and years of equipment. Why the bewildering variety? Because, the parts manager told us, it was city policy to buy whatever vehicle had the lowest sticker price on the day of purchase.

“It doesn’t make any sense,” one mechanic said. “When you look at all the equipment downtime, the warranty work that weak suppliers don’t cover, the unreliability of cheaper machines, and the lower resale value, buying what’s cheapest doesn’t save us anything.”

Our next trip was to the parts purchaser. He agreed with the mechanic. “It would certainly make my job easier to have fewer parts to stock from a few reliable suppliers. But central purchasing won’t let me do it.” Onward to central purchasing, where we heard this: “Boy, I understand what you’re saying because I hear it from all over the organization. But there’s no way we can change the policy. The comptroller wouldn’t let us do it.”

Enter the comptroller. “You make a very strong case,” he admitted. “But I can’t let you do it because the city attorney won’t let me approve such a thing.” On to the city attorney. “Why, of course you can do that,” he said. “All you need to do is write the specifications so they include the warranty, the ease of maintenance, the availability of parts, and the resale value over time. Make sure that’s clear in advance, and there’s no problem. In fact, I assumed you were doing it all along.”

This was a stunning disclosure.

This sequence is one I have found to be repeated over and over. People think the status quo is required by law, regulation or policy. Those responsible for policy (in government those responsible for creating policy and regulation in compliance with the law) think sensible judgement is being used (as the policy normally allows). But in fact the management system has evolved to strictly follow silly guidelines that are not only not the intended result of policy but are often directly contrary to policy (as in this example, making spending decisions that those making the decision knew to be bad, but they incorrectly thought were required by policy).

finding the solution meant including front-line employees in problem solving. The fact of being consulted and enlisted rather than blamed and ignored resulted in huge improvements in morale and productivity

My father, William Hunter, worked with Terry Homes, union president, and Joe Turner, division foreman (management) at the first street garage to make this happen. Management-union relations had not been great and there were significant challenges to overcome. Soon though those 2 were presenting at large meetings at Ford and elsewhere on applying Deming’s ideas in a union environment from a management and union perspective. And Peter Scholtes, then a City of Madison employee also worked on this effort. Having Peter and my father surely helped navigate this tricky process.

The changes in organizations when they respect everyone and seek to take advantage of the skills, brains, desires and creativity of everyone are tremendous. And those benefits go to everyone; to employees, to customers and to other stakeholders too.

The success of the initial efforts resulted in expanding the practices within the city government, including the police department.

Couper [the chief of police], a former marine, responded to these tests with what he now calls a typical military approach: “You’ll be nice to citizens, or you’ll have hell to pay!” This got him nowhere, of course, and after several frustrating years he took a sabbatical, rethought his management approach, and familiarized himself with Deming’s quality gospel. He then decided, as he puts it, “to run the department for the 95% who did their jobs well, rather than write the rules for the 5% who were difficult.”

You can read more of David Couper’s good ideas on his excellent blog, Improving Police, including his recent post Can Deming Save Us Again?

The success of management change is often challenge for many reasons but issues related to psychology are often very near the top of the challenges.

Some wary union leaders and members turned out to be among my strongest backers. Terry Holmes, the tough master mechanic and longtime union president, became a staunch ally. “Before the quality program, all we did was put out fires,” he once told me. “Morale was low. The message from management was, ‘You don’t know what you’re talking about. Do as you’re told.’ Once the program was well under way, however, the message became, ‘You and your teammates understand your work better than management can. Tell us how to help you do it better.’”

Some managers who were initially highly skeptical became advocates of the program over time. Speaking of his own subordinates’ quality team, one department head told me, “I had a ‘show-me’ attitude for three years—and they finally showed me.”

Even though the article is now nearly 25 years old it is packed with great information including these very wise words:

Implementing a Deming quality strategy is not simply a matter of adopting a new set of slogans or a new accounting system. It’s a matter of radical restructuring—part sociology, part systems theory, and part statistics—all aimed at liberating human ingenuity and the potential pleasure in good work that lie at least partially dormant in every organization.