Posted In: Appreciation for a System, Deming Philosophy, systems thinking

Appreciation for a system is one of the four components of Deming’s management system. In this context, the most common item to think of is Deming’s diagram of an organization as a system. That is a powerful diagram.

When thinking of appreciation for a system within the Deming context, the view of the organization as a system is the most common concept to consider. But systems thinking has an entire body of knowledge that is useful. Exploring the wider field of systems thinking was much more common in the Deming community decades ago (when W. Edwards Deming was with us) than it is now.

Feedback loops are a part of systems thinking.

A reinforcing loop encourages the system to continue in that direction (e.g. a damn starting to leak. As water flows over the damn wall, it will further erode the wall which leads to more water flowing over causing more erosion).

Sometimes you can design the process to have countermeasures automatically take place if conditions start moving in the wrong direction.

When the reinforcing loop is a desired result, then we want to design the system to encourage things to continue to move in that direction. Sometimes it can be useful to think of it as having a bit of inertia, but as you put in some effort to get things going, then it gathers momentum and can produce more and more benefit for very little effort (like rolling something down a hill). 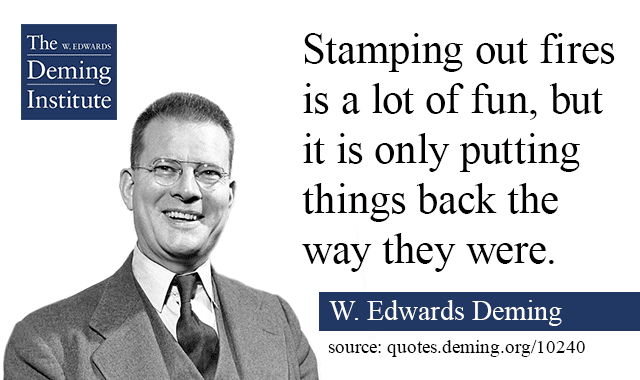 Organizations in fire-fighting mode can often fall into this trap. When there is a crisis, direct resources to address that crisis can return results to at least a non-crisis level. At that point, what an organization based on Deming management system would want to do is consider if that crisis is an indication of a bad system that we should spend resources to examine and improve. Often people say this is what they do, but it isn’t, normally; at best they slap on band-aids and move on.

In the all too common fire-fighting management system organization, what often happens is there is a new crisis and resources must be directed to that. What actually can end up happening is if any area is performing well, they are able to have resources taken away and used to address the crisis. So, if certain areas start to do well, there are balancing forces to bring down their performance (losing resources to accomplish the tasks). And poor areas get temporary infusions of resources to bring levels from a crisis to less poor (but rarely to actually good results because as they move in that direction, some other crisis needs attention).

I explained how well our organization fit this model to one of my bosses at one point. He didn’t like that idea at all. I tried to tell him he didn’t want to hear what I had to say several times, but he insisted so I told him. It was in relation to what I learned at the Hunter Conference on Quality (named for my father, W. Edwards Deming spoke at the inaugural conference) at which I attended several sessions on systems thinking. Sure, I could have avoided telling him, but after he insisted, I felt it is better to share my ideas with management; maybe they would actually listen. But they didn’t. I left in a year or so.

To Get Different Results the Management System Must Change

They had a pattern I have seen often since. First, hire people with the expressed intention to have them think differently and address the problems with the organization culture that is known to need help. Then force them to fit into the existing culture. If there are any crazy people that resist that (like me, for instance) get upset with them for not going along with the way things have always been done.

It is funny how common this is and how they don’t understand that if you want to change the culture, that means things they do have to change. Mainly they want change in the form of better results but not it how management thinks or acts. The idea that the system will keep producing what it has always produced if you don’t change escapes them. They want changed results but not to change what they do.

Maybe you can applying the above ideas on feedback loops to improve your organization even if you decide to leave out telling your bosses that your management system has a balancing loop to keep performance at a level that gets tolerable results, but makes it very difficult to create a climate for sustained improvement.

There is a great deal of value in thinking systemically. I found it very helpful in figuring out how to get the largest leverage within a system (or the change most important to make in a system to achieve great leverage).