The Deming Management Method by Mary Walton was a book that served to introduce many to the ideas of W. Edwards Deming. The book was published in 1988. 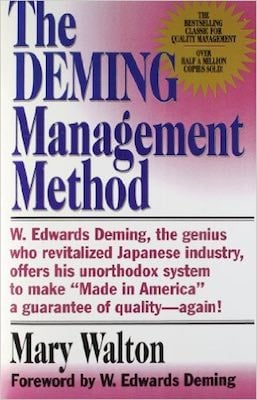 Dr. Deming wrote an introduction to the book, including these words:

The follies of the systems of management that thrived in the expanding market that followed the War are now all too obvious. They must now be blasted out, new construction commenced. Patchwork will not suffice.

Everyone doing his best is not the answer. Everyone is doing his best. It is necessary that people understand the reason for the transformation that is necessary for survival. Moreover, there must be consistency of understanding and of effort. There is no substitute for knowledge.
…
The biggest problem that most any company in the Western world faces is not its competitors, nor the Japanese. The biggest problems are self-inflicted, created right at home by management that are off course in the competitive world of today.

The full introduction by Dr. Deming is worth reading. The book, by Mary Walton, a journalist, is written with a journalistic style that many find more comfortable to read than Deming’s own books. Mary worked closely with Dr. Deming, accompanying him on consulting trips and having him review material (especially that material related to his thoughts on management).

She also included detailed accounts of her visits to workplaces adopting Deming’s management methods. From her preface:

The companies that had turned to Dr. Deming’s method shared a sense not only of urgency and commitment but also of optimism and excitement. Suddenly, there was a new philosophy that promised answers where none had previously existed. Trained to gather and interpret data, their problem-solving teams were like detectives turned loose with a new sheaf of evidence. At last, they had the ammunition to eliminate long-standing glitches in their processes, and they went after them with the enthusiasm of crime-stoppers.

Show the slightest interest in their work, and out would come sheets of numbers and stories of misinterpreted clues and, finally, success. Probe a little more into the psyche of the employees, and their stories would bring tears to your eyes: what it meant to be taken seriously rather than to be treated with disdain. To be sought out for one’s knowledge and to be asked to contribute to the future of a company.
…
These ventures into the American workplace showed clearly that whether the product is hardware or service, whether the company employs two hundred or two hundred thousand, Americans still care about quality. The country is full of intelligent, courageous people who would change if they only knew how.

In Part Three, Making Deming Work, I sought to report from the factory floor—or the office cubicle, as the case might be. I wanted to talk directly to the people involved in the change and to find out exactly what had taken place. I wanted to deal with specifics rather than generalities. Wherever I went, I found the same kinds of problems and the same human reactions. An executive who thinks his or her company is different from the ones in this book—who says “We don’t have those problems” or “That doesn’t happen here” – doesn’t really know what’s going on, hasn’t really talked to the company employees in an atmosphere free of fear.

It is helpful to remind people, from the very beginning, Deming’s management methods were aimed at all management, not just the factory floor as many mistakenly seem to think.

Related: Too Many People Putting Forth Their Best Efforts – The Essential Deming, a New Book on Dr. Deming’s Work – Four Days with Dr. Deming – The Improvement Guide