We Need to Understand Variation to Manage Effectively

I had the good fortune to get to know Dr. Deming beginning in 1986. I call it a “correspondence relationship”. We wrote letters (these were the days before e-mail, and I doubt that Dr. Deming would ever send an e-mail even if it had existed). I played a small role in some of his 4-day seminars and had some opportunities to have some discussions with him on various topics. John Hunter asked me to make a contribution to the W. Edwards Deming Institute blog and I am honored to do so.

My current role is Network Director for the Healthcare Value Network, which is a peer-to-peer learning network sponsored and managed by the ThedaCare Center for Healthcare Value. It’s my responsibility to make it possible for approximately 60 healthcare organizations in North America to learn, share and connect with each other in the application of what is being called lean and lean thinking. You may be interested in a white paper that we recently published regarding the Network.

Many healthcare managers seem to be interested to see how lean might apply to their work.  According to Jim Womack, the word “lean”, as it relates to process improvement, came from researchers at M.I.T., John Krafcik in particular, who coined the term “lean” to describe what the Toyota Production System did – provided ever increasing value to the customer with less. Less time, human effort, waste, defects, inventory, and rework.  According to Mr. Womack, John stated, “it needs less of everything to create a given amount of value, so let’s call it ‘lean’.”

Where did the Toyota Production System come from?  Based on my readings and discussions with others, I believe it came from many contributors over decades.  It is one system (Toyota has many systems) based on a way of thinking.  But where did this way of thinking come from?  Here too, I think it came from many contributors, over time, but one in particular deserves mention – Dr. W. Edwards Deming.

Dr. Deming brought new knowledge to Japan and the leadership of Japan beginning in 1947.  He made multiple trips and taught people at all levels.  He also learned from them.  He taught on the topics of variation (understanding it, how to react to it, how to reduce it), quality, seeing the organization (and country) as a system and the benefits of collaboration. There were other topics as well.  The point that Dr. Deming stressed in his later years was the he brought “new knowledge”.  He was not proposing knowledge and practices from western management.  As a matter of fact, he derived his 14 Points for Western Management because there was so much that managers in the United States and other countries needed to change.

In the late 1980s, Dr. Deming began to articulate the knowledge from which the 14 points were derived.  He described this as the “system of profound knowledge“, the 4 components of: understanding variation, appreciation for a system, psychology and theory of knowledge and their interactions.

I believe that much of what I see and hear these days related to lean and lean thinking can be traced back to Dr. Deming, his teachings and the system of profound knowledge – with one exception.  I rarely hear anything about “understanding variation“.  I hear about teams and tools, visual management, daily tracking, problem identification, flow, pull, standardized work, problem solving, value streams and their analyses.  But I don’t hear much about “understanding variation”. I have some ideas about why this is so, and would like to share them with you and get your thoughts.

Possible explanation #1 – people are copying tools and methods, but they may not fully understand the principles.

To illustrate this, I am borrowing the “iceberg” metaphor (in the diagram below) from Barbara Lawton who worked very closely with Dr. Deming.  When I think in terms of what a person may see in any organization, there are the things that are visible, on the surface – the tools and methods.  What a person will not see, directly under the surface, are the processes and deeper still are the systems.  I use Dr. Deming’s definition of a system “a set of interdependent components working together toward a common aim”. What exists even deeper are the underlying principles.  I believe that, over time and with much trial and error, organizations like Toyota developed tools and methods that we can see. These are the components of the Toyota Production System, and this system is based on certain principles.  But these principles are not so apparent. It’s not like I have not heard about the principles behind this system. Some researchers and authors have described some of the principles. James Womack and Dan Jones listed five in the book “Lean Thinking”: 1) specify value, 2) identify the value stream, 3) flow value, 4) pull value, and 5) pursue perfection.

As I continue to study the Shingo model for operational excellence (named after Dr. Shigeo Shingo, who was Taiichi Ohno’s mentor), I learn about the 10 guiding principles upon which the model is based: 1) respect every individual, 2) lead with humility, 3) focus on process, 4) embrace scientific thinking, 5) flow and pull value, 6) assure quality at the source, 7) seek perfection, 8) create constancy of purpose, 9) think systemically, and 1) create value for the customers.

In my way of thinking, many of these points are very similar to Dr. Deming’s 14 Points for Western Management. They describe things to do or things not to do. But if we want to know why we need to do certain things, we need to dig deeper still, which takes me back to the system of profound knowledge. Perhaps the iceberg metaphor needs to be modified? Perhaps below “principles” there are bodies of “knowledge”? I can connect many of these principles to the system of profound knowledge as illustrated below using the 10 guiding principles from the Shingo model, but I have not (yet) found strong connections with “understanding variation”. What I think is happening is shown in the diagram below.  I believe that many people think they can merely copy the tools and methods from organizations like Toyota (from the left) and place them on their existing platform of the prevailing style of management (on the right).  I recall something Dr. Deming said in the NBC documentary, If Japan Can, Why Can’t We? “People travel to other companies in other countries to try to copy what they are doing, but they don’t know what to copy”. 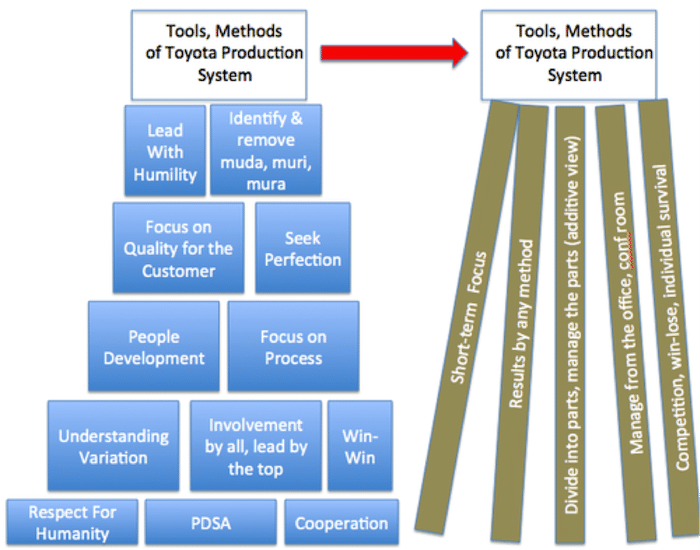 When Dr. Deming conducted his 4-day seminars he talked about “tampering” and the 4 rules of the funnel as examples of not understanding variation.  The 4th rule (trying to match the last drop) might be at play with organizations that try to copy the Toyota Production System.  It could be that they are imitating the methods and tools (and perhaps creating some systems), but do they understand the principles or the knowledge behind the principles?  I think the answer may be “no”. 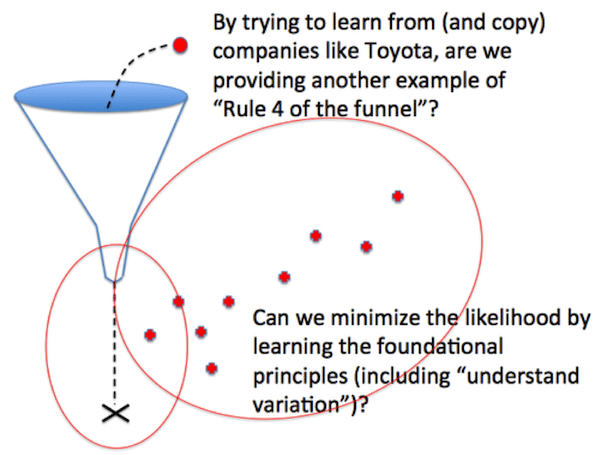 This is a possible explanation for why I am not hearing much about the principle of “understanding variation”. The principle of “understanding variation” and how to react to variation has not been a component of the prevailing style of management.  It has not been taught in schools, universities and business schools and it has not been taught in businesses – including those that are trying to learn and practice what is being called “lean”. People are copying one organization’s application of the underlying principles, but they don’t know what to copy (the principles, at least not all of them).

Possible explanation #2 – “understanding variation” has been not fully understood.

It could be that many people do not see the full implications of understanding variation.  In particular, I think they miss this point from Dr. Deming: “the most important application of principles of understanding variation is in the management of people – not on the shop floor”.  So, it’s possible that people think about managing variation in the context of measures and control charts (perhaps viewing it as a “six sigma” thing).  Dr. Deming was talking about more that that.

Here are some key points from his 1993 book “The New Economics“: 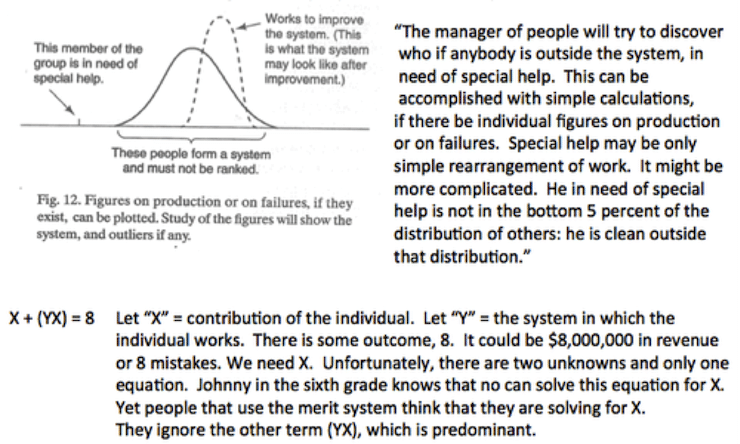 I like the way Heero Hacquebord (another person who worked closely with Dr. Deming) talked about this.  Heero expanded upon the interaction between the system and the individual and described 3 worlds.  Here’s World I: Do we see any real-life examples of World I?  I don’t think so.  Some people think that sports and athletics might be an example where one person is first, second or third or you having measurable results and winners and losers. However, there are still systems (rules, conditions, referees, fans, etc.). So, the performance is not due entirely to the individual. Does this world exist?  The only example I can think of would be the world and conditions created by Dr. Deming in the red bead experiment.  All of the variation came from the system and there was nothing that came from any of the willing workers.  But that’s not the real world, so I don’t think we have real-life examples of World II. 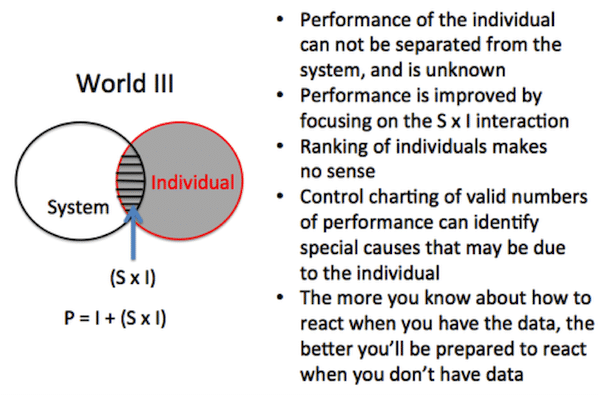 I think this is the real world.  Sometimes the amount of overlap between individuals and systems is huge and sometimes it is small, but it is always present.

In summary, I’d like to know more about why I am not hearing about the principle (or component of knowledge) that Dr. Deming called “understanding variation” from the managers who are applying lean and lean thinking. I have described two possible explanations, and would like to hear your thoughts on this.

Based on feedback Mike has provided an updated view in his post: Refinement of Possible Reasons I’m Not Hearing About “Understanding Variation” [broken link removed]