By John Hunter and Bill Bellows.

Beginning in 1951, the Japanese Union of Scientists and Engineers (JUSE) has awarded the Deming Prize to honor organizations, and later, individuals, for extraordinary accomplishments in quality management. Recipients receive a prestigious medal, complete with an image of Dr. Deming, with his quotation, “The right quality and uniformity are foundations of commerce, prosperity and peace.”

Students of Dr. Deming know of his appreciation of the statistical control of variation, a body of work pioneered by his mentor, Dr. Walter Shewhart. Guided by Shewhart, Deming learned the significance of managing variation, with appreciation of both common and special causes, and the economic value of stable processes, with predictable levels of variation.

It doesn’t follow that because Dr. Deming suggested efforts to identify (and remove) special causes of variation and sought to manage common cause variation (to achieve the “right uniformity”) that caused processes to be unreliable and that harmed customers, it meant he was against variety. Nor does it mean that he failed to understand the importance of variation in different contexts than the context where it caused problems. Drawing such a conclusion is just not sensible when looking at Deming’s larger body of work, extending from his employment at the Department of Agriculture to the publication of his last book, The New Economics. The conclusion that Dr. Deming was advocating the elimination of variation is a common misunderstanding that is usually caused by taking one quote and drawing conclusions about what that quote meant – conclusions that are in conflict with his Deming’s System of Profound Knowledge. 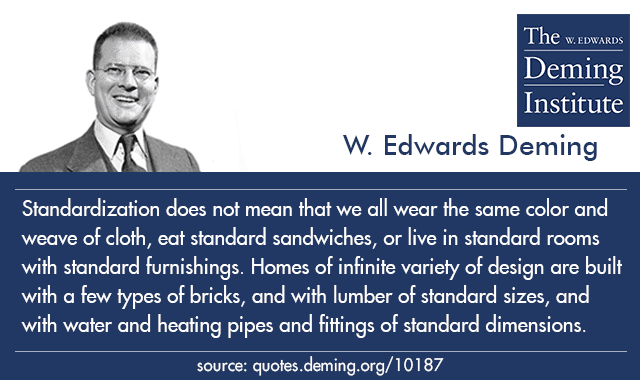 As evidenced by his theory of management, Dr. Deming understood the importance of seeing any organization as a system, and how variation fits within that system, including the example of matching the seasonal variation in demand for an organization’s services with variation in the staffing of the organization.

A critical first step in striving for the “right uniformity” is achieving processes that are predictable (otherwise known as stable). When variation within a stable system causes problems and reduces efficiency, efforts to then reduce common cause variation can be important. Yet, reducing common cause variation to zero overlooks Dr. Deming’s awareness in The New Economics that “life is variation, variation there will always be.”

Dr. Deming understood you didn’t use the same improvement thinking every time you wanted to improve. You selected the useful management tools and concepts that fit the current situation. It is important to have a wide variety of tools and thinking to allow finding the best ways to improve different situations.

Iteration is an extremely important part of improvement efforts. Why? Because trying a variety of ways to improve and a variety of changes to the existing conditions will lead to finding the most valuable improvements. The PDSA improvement cycle is designed specifically to introduce more variation into improvement experiments. The value of many small attempts using different tactics (introducing variation to learn what works best) is a core part to gaining knowledge in a Deming management system.

W. Edwards Deming stressed the importance of understanding psychology, appreciating how different people (variety!) provided important contributions, and how that variety helped the organization. You need to design systems to maximize the benefit gained due to some forms of variation.

It is a mistake to think that W. Edwards Deming didn’t understand the value of variety or of variation in the right context. One must manage the variation in a system in a way that improves its ability to deliver reliable value to customers. That doesn’t mean variety and variation in other contexts are not understood to be valuable.