Healthcare, Paradigm Shifts and the Influence of W.E. Deming

In 2014 I presented a paper at the 20th Annual International Deming Research Seminar on the topic of “Understanding and Application of Deming’s System of Profound Knowledge in Healthcare.” In this paper, I traced the contributions of Dr. Deming to Japan starting in 1950, and how companies like Toyota developed management systems that are now being studied (and copied) by other industries (including healthcare).

Earlier this year, I presented a paper at the 21st Deming Research Seminar on one aspect of Dr. Deming’s philosophy (understanding and managing variation) that I found to be largely missing in the conversations and actions of many healthcare organizations. My goal was to find out why this body of knowledge seemed to be absent. In conversations with many healthcare mangers, clinicians and consultants, I discovered some of the possible root causes and described the implications for not understanding how to react to variation. I focused on how this principle applies when we have figures, as well as when we don’t have figures (primarily in the management of people and behaviors). I recorded a webinar summarizing some of the key points.

I still think that there is hope, and I see evidence of improvement in the healthcare delivery system in the future. There is a growing movement (the beginnings of a critical mass?) that is taking on the transformation of healthcare management. I’ve seen these movements before. This one looks serious; I think it’s going to stick. A new book, Management On The Mend, written by John Toussaint, MD describes a viable pathway for healthcare system transformation. Dr. Deming is cited several times in the book, and the reader will find evidence of Dr. Deming’s thinking throughout the 180 pages of the book.

Why is it so hard for healthcare managers to understand what must be done and to take the necessary action? I don’t have all the answers for that, but I do have some thoughts. I see several interrelated factors. I’d like to describe one of these factors in this blog post.  Factor #1 – Some healthcare executives are just now realizing their world is undergoing a change in worldview – a paradigm shift.

Healthcare is the latest industry to experience a change in worldview from “machine management” to “system management.” To understand the magnitude of this change, I would recommend the work of Sally Goerner who wrote the books: Chaos and The Evolving Ecological Universe and After the Clockwork Universe where she describes the change from “clockwork thinking” to “web thinking.” Goerner and others have described as the “S-Curve,” a pattern that is recognized by economists, physicists, scientists and marketers.

You have probably experienced an S-Curve. Here’s a simple example. The changes in technology for the way that sound is recorded and available for listening over the last 140 years is shown in a series of S-curves in the figure below (gramophone -> phonograph -> turntable -> reel to reel tape -> cassette tape -> 8-track tape -> compact disk ->mp3 player -> smart phone -> cloud storage). At a very basic level, each of those S-Curves looks something like the diagram below. Step 1 – A new idea surfaces. It is unproven and the adoption rate is low. Step 2 – The idea gains more acceptance and use. Step 3 – Problems surface that cannot be solved by the prevailing idea. Step 4 – A new idea surfaces. 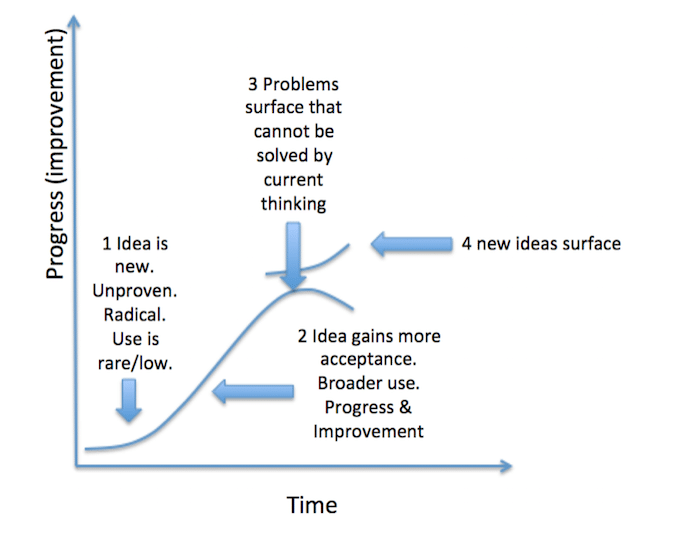 There is actually much more going on, which is illustrated in the diagram below.   The S-Curve has several phases. The cycle continues as diversity of ideas starts a new formation phase.

Healthcare has gone through several S-Curves. Not so long ago, the worldview for healthcare provision could be described as a “craft model.” It was primarily driven by the knowledge and skills of the individual practitioner who provided care to one patient at a time. This model worked on a small, local scale, but new problems surfaced that could not be solved by working harder in the craft-based model. Care of larger populations and more complex conditions required creation of hospitals where patients could be “housed” overnight. An entire industry has evolved to address these needs. A new mental model was needed.

The next S-Curve was driven by the application of modern management to the medical model. This worldview has been described using many adjectives: industrial, clockwork, mechanistic, “command and control,” “Sloan management,” to name a few. This is the worldview that is still dominant in most of our institutions including education, government and industry. In healthcare, the model has created two primary support structures (some would call them “silos”). The clinical and administrative support structures have tried to accommodate the autonomy of the clinician, and at the same, time manage the administrative support processes like any other business. This model is exhausting its usefulness, and new alternatives are surfacing.

A new worldview began to surface over the last several decades. I believe it can be traced back to the early 1900s when physicists began to understand the limits of the Newtonian model and discovered laws and principles of what has been called the “web” or “integral” worldview. I see healthcare moving from zone d (fragility zone 2) or well into zone e (limitation phase). I recorded a short video that describes the current state of healthcare and the contributions of Dr. Deming’s management philosophy as one of the “seeds” for a new way of thinking and managing in the future.

This is a brief summary of the key points from this video:
After World War II, industries in Japan found themselves in a new world. They had to reverse their reputation for quality and compete in the world market. With new knowledge from Dr. Deming (and others), they turned that reputation around. Meanwhile, management in the United States had a different problem. Theirs was an expanding market. What they had learned about quality and productivity in the war effort was largely forgotten. Quality was not the problem, quantity was.

While many Japanese companies developed what has become known as “lean” management (through years of trial, error and PDSA cycles), Western management created what Dr. Deming called the “mythology of management.” U.S. companies attributed to their success to their command and control management practices, when in actuality it was largely due to luck (riding the waves of the expanding market).   There was a “wake-up call” with the 1980 NBC program White Paper “If Japan Can, Why Can’t We?” Dr. Deming was featured at the end of that program, and he made this statement: “People here (in the United States) expect miracles. They go to Japan to try to copy, but they don’t know what to copy.” This led to Deming’s articulation of his 14 Principles for Western Management, as well as the Seven Deadly Diseases and the Obstacles. Several years later he articulated the system of knowledge upon which the 14 Points were derived.

Healthcare in the United States has also experienced an expanding market. For years the message was “more.” More hospitals, more beds, more physicians, more specialists, more capital, more market share. The days of the expanding market are over. We cannot afford the waste and inefficiency of the prevailing style of management. Something different is needed – a new worldview. The prevailing management practices need to be thrown overboard, not just adjusted. It’s not just a matter of learning some new tools and techniques.

New and different thinking is required. This won’t be easy. Apparent success in the prevailing style of management has led people to think they need to just work harder. I found this video that (I think) shows how difficult it will be for management to unwind their current thinking and learn new principles.

A new worldview for management is needed, and the old one will not give up easily. Sometimes we will make progress one retirement (or funeral) at a time. Some managers will understand what Dr. Deming meant by “transformation beginning with the individual.” We are experiencing a new S-curve in healthcare.

I would be interested in your feedback on these thoughts.

Related: Application of Deming’s System of Profound Knowledge in Healthcare – What I Learned at the 21st Annual International Deming Research Summit – We Need to Understand Variation to Manage Effectively