Reflections on Dr. Deming’s Hospital Notes – What Has Changed Since 1990?

About ten years ago, somebody sent me a PDF file of Dr. Deming’s “Some Notes on Management in a Hospital.” I felt like somebody had shared a bootleg tape of my favorite band, as I wasn’t sure the article had ever been formally published anywhere. Since I wasn’t sure if it was a public article, I didn’t share it widely and didn’t blog about it. 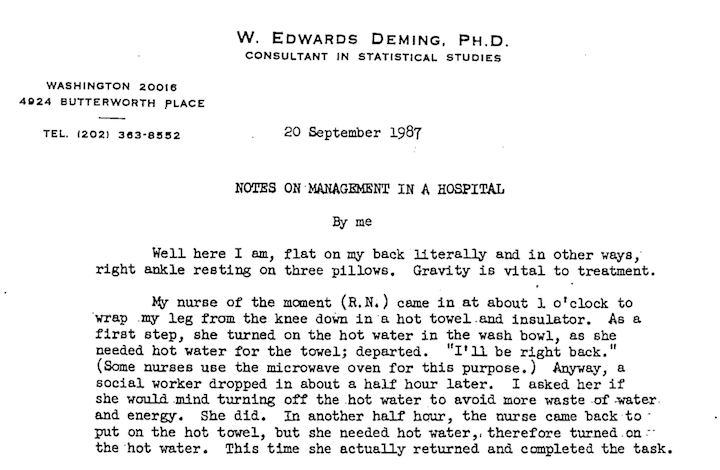 I was happy to see John Hunter share the article on the Deming Institute blog last year, along with some context. It had been published in the journal of the Society for Health Systems (an organization I am active with today, including running the Red Bead Experiment at their 2016 conference). Now that the article is out there, I’d like to share some thoughts and reflections on my decade in healthcare improvement.

The SHS journal article starts with a brief introduction, not in the original document, by Dr. Deming that summarizes the key points, all of which are still relevant today.

Too many healthcare workers don’t understand the system or value stream that they are a part of. They know their own work, but they don’t understand the connections to other departments (or even to others performing different roles within their same department). This lack of understanding isn’t the fault of these individuals. Lean methods, such as value stream mapping and improvement projects carried out by cross-functional teams can break down barriers and increase understanding. I’ve seen many organizations progress from blaming those nameless jerks in another department to working together toward the goal of better patient care.

It’s still true today that “hard work and best efforts are not sufficient for the optimization of a system.” Most hospitals and doctor’s offices today aren’t designed as a system. It’s more like a collection of smart, hard-working individuals who have just been thrown into a building in the hope that everything will somehow sort itself out (because everybody is smart, hard working and caring). A system doesn’t design itself and a system doesn’t manage itself. Thankfully, some organizations are learning that “Lean Design” (or “3P”) and similar methods (like Design Thinking) can help design better systems that help people be successful. It’s often not much more complicated than studying the patient’s needs, studying the work, and respecting and engaging team members to have a say in how processes, technology, and spaces are designed and utilized.

From a quality and patient safety standpoint, too many healthcare organizations still rely on asking people to be careful, as if those “best efforts” are a way to prevent human error. The beatings (and blaming and punishing) will continue until quality and safety improve? Thankfully, some organizations are realizing that quality and safety must be built into the system, rather than being inspected in (or worse, “punished in” by blaming individuals who make inevitable mistakes).

Too many organizations (and oversight bodies like the federal government) rely on quality measures (which might be inaccurate, unfair, or gamed in some way) along with backward looking financial punishments or rewards. “Pay for performance” systems sound good at first, but often prove dysfunctional, as Dr. Deming warned us about decades ago.

My opthamologist told me once that his CMS (Centers for Medicare and Medicaid Services) quality incentive payment was delayed. This is where the federal government was paying him some portion of reimbursement that had been held back, to be paid based on his quality measures. Why was the payment delayed? My doctor had reported zero post-surgical complications, a number I could only trust to be true and accurate. Because “zero” was an unexpected result, the government saw zero as “missing data” and he had to file appeals to get paid what he was entitled to. This was frustrating and not good for his cash flow, of course. The lesson learned? The ophthalmologist said he learned to report having one complication even if that wasn’t actually the case. So much for his pride and joy in work.

Dr. Deming, in that introduction, talks about the need to respect and consider all points of view in healthcare. The best Lean thinking organizations today put this into action, when they do a better job of listening to employees of all classifications and pay grades. These organizations help form teams with a better understanding of their work and system, instead of a department just being a collection of individuals. Lean organizations engage every employee, regardless of the letters after their names, in improvement through Plan Do Study Adjust cycles and a Kaizen improvement process. 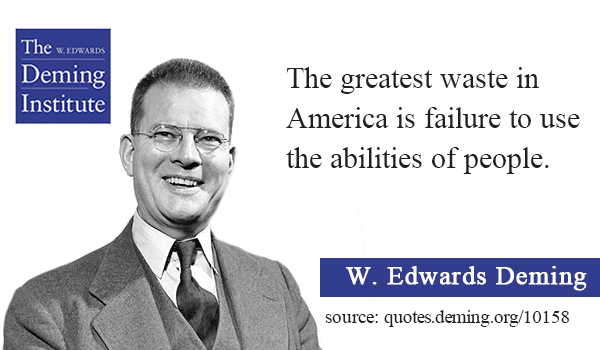 When I teach at health systems, I always ask who has heard of Dr. Deming. Many hands go up. I ask how many of heard of PDSA or PDCA. Again, many hands go up (although not always the same hands). When I ask how many think they get to actually practice PDSA, most hands stay down at most organizations. Again, this is changing at organizations that really practice Lean (although, sadly, some organizations would say they are “implementing Lean” without engaging everybody in improvement).

I see the best efforts of too many individuals being squandered. This includes nurses, doctors, and other healthcare professionals who are being worn down by the “forces of destruction” that Dr. Deming described. This also includes managers and leaders who are so consumed with fire fighting and bureaucracy that they are not able to spend time helping improve the system. I also see people in departments labeled Lean or “Process Improvement” who have their skills and efforts squandered because senior leaders think quality isn’t their responsibility or that it can be delegated. The use of random Lean tools isn’t transforming any health system. Those that are making great progress have lived the Deming idea that quality starts at the top, in the boardroom.

The scenarios that Dr. Deming describes in the article could all happen today in a hospital, although he’d likely have a private room and slightly better food. I heard similar complaints from my grandfather before he passed away last year at age 93 (the same age as Dr. Deming when he passed, I just realized). These problems, the same in 1987 or in 2016 include:

As Dr. Deming would have said, the problem is not the workers. Hospital leaders need to “learn something about supervision” as only they can “make the changes in procedure and responsibility that are required.”

Has there been some progress in healthcare? Sure. As William Gibson wrote, the future is here… it’s just not widely distributed yet. From what I’ve seen the best “Lean hospitals” with the best results have a foundation of systems improvement and management that is based as much on Deming principles as anything. Yes, Lean mindsets have significant overlap with Deming’s teachings (not surprising, given his influence on Toyota) and Lean methods can be very effective in creating a culture of quality and improvement. But, there’s still too big of a gap. Too many patients are being harmed and killed and too many healthcare professionals are getting frustrated due to poor management and bad systems. We have to do better. It’s proven that we can do better… but will everybody do so?

He is the founder and lead blogger and podcaster at LeanBlog.org, started in January 2005.

Mark is also the Vice President of Improvement & Innovation Services for the software company KaiNexus.

Related: Quality Improvement in Maternity Services, How Deming Can Help – Healthcare, Paradigm Shifts and the Influence of W.E. Deming – Application of Deming’s System of Profound Knowledge in Healthcare – Fewer Patients-In-Process and Less Safety Scheduling; Incoming Supplies are Secondary – Why Dr. Deming’s Work is So Important to Me (by Mark Graban)