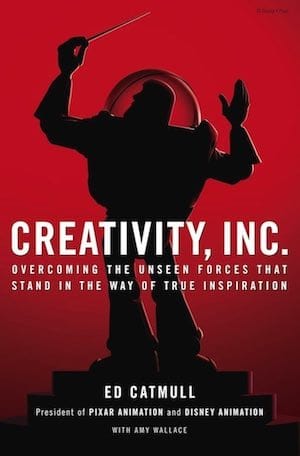 Ed Catmull co-founded Pixar with Steve Jobs and John Lasseter. In Ed’s book, Creativity, Inc.: Overcoming the Unseen Forces That Stand in the Way of True Inspiration, he discusses how important Deming’s ideas were to his efforts to help make Pixar what it is today.

As we struggled to get Pixar off the ground, Deming’s work was like a beacon that lit my way.
…
it wasn’t until the 1980s when a few companies in Silicon Valley, such as Hewlett Packard and Apple, began to incorporate them. But Deming’s work would make a huge impression on me and help frame my approach to managing Pixar going forward.

One of the challenges in learning how to be a manager is you see similar statements from managers that create systems that are very different in fundamental ways from what they say. So you see quotes like Ed’s in his books and figure that is similar to what most executives writing books says.

John and I had very conscientiously tried to make sure that everyone at Pixar had a voice, that every job and every employee was treated with respect.

How each company adopt the management concepts W. Edwards Deming proposed will be different. That helps make Deming’s management ideas powerful but it also disappoints some in that there is no simple management recipe to follow. We learn from reading what others have tried. And we learn from what worked. But we can’t just copy; we need to understand what the principles (the theory) behind what they did and understand how to apply those principles in our organization.

At Pixar, we’d devised a way to give our employees money and gratitude. When a movie makes enough money to trigger bonuses, John and I join with the directors and producers and personally distribute checks to every person who worked on the film. This jibes with our belief that each film belongs to everyone at the studio

This is an example of a good way to share good results within the Deming context. Deming spoke out against traditional bonuses to individuals or individual business units. And there is debate in the Deming community still over whether bonus are ever sensible. I side with those that agree company wide profit sharing is compatible and not just acceptable but a good idea. But the area is a bit tricky and it is easy to make decisions that it could be argued will harm viewing the organization as a system.

You’ve heard the saying “Your employees are your most important asset.” For most executives, these are just words you trot out to make people feel good— while they may be accepted as true, few leaders alter their behavior or make decisions based upon them. But Steve did, taking that principle and building our headquarters around it. Everything about the place was designed to encourage people to mingle, meet, and communicate, to support our filmmaking by enhancing our ability to work together.

I enjoy learning as I write blog posts: I learn more about my thoughts as I delve into them in order to explain them (this is the same idea behind the thought that teachers often learn more than students as they struggle to organize their thoughts to explain them).

One of the things I find frustrating about business writing is while there are often fairly good ideas presented (in the fairly selective reading I do) those ideas are largely pointless without a view of the organization as a system. And it is rare that there is a consistent management system promoting the ideas the writing claims to promote.

I am not sure if the authors and executives believe the ideas, but I rarely see evidence that the management systems support making those ideas integral to the organization. Again the words from the quote are good, but it is only in looking at Pixar and how that is made to work that I get a feel for whether they really believed that or are just using explanations that sound good.

To me it seems like Pixar really has done a great deal to focus on what is important in order to create delight in their customers. And the explanations in Ed’s book seem to provide a sensible view on what Pixar was trying to do to create an organization that created exceptional movies.

Unleashing creativity requires that we loosen the controls, accept risk, trust our colleagues, work to clear the path for them, and pay attention to anything that creates fear. Doing all these things won’t necessarily make the job of managing a creative culture easier. But ease isn’t the goal; excellence is.

I agree strongly with the second two sentences. I agree with much of the first sentence but I think people are too fast to believe risk is just necessary for creativity. It is true that we need to try new things and do more experiments. I do believe there is more use in using process thinking and concepts such as piloting ideas on small scale and mistake proofing to greatly reduce risk while actually improving creativity.

The book does a great job of looking at a very successful company and provides ideas managers can learn from about creating an engaged and creative workforce.